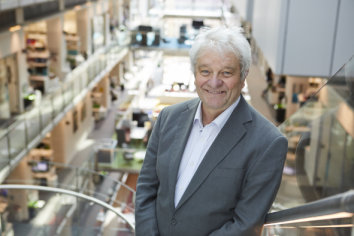 Paul Nurse is a geneticist and cell biologist who has worked on how the eukaryotic cell cycle is controlled. His major work has been on the cyclin dependent protein kinases and how they regulate cell reproduction. He is Director of the Francis Crick Institute in London, and has served as President of the Royal Society, Chief Executive of Cancer Research UK and President of Rockefeller University. He shared the 2001 Nobel Prize in Physiology or Medicine and has received the Albert Lasker Award and the Royal Society's Royal and Copley Medals. He was knighted by The Queen in 1999, received the Legion d'honneur in 2003 from France, and the Order of the Rising Sun in 2018 from Japan.  For 15 years was a member of the Council for Science and Technology advising the UK Prime Minister and Cabinet concerning science and innovation issues.  He is now one of the 7 Chief Scientific Advisors of the European Commission.

Please register below for the lecture by June 4.